The Northern Netherlands has unveiled a €2.8 billion investment plan to deliver emissions-free hydrogen at commercial scale by 2030

On 22 May 2019, citizens in the Dutch province of Groningen were jolted awake at 5:49am by our region’s third heaviest earthquake ever, a sobering 3.4 on the Richter scale. That feels — and sounds — like a train passing underneath your house, as local media reported.

Groningen has experienced more than 1000 earthquakes since the late 1980s, growing more intense in recent years. These are now widely acknowledged to be the result of natural gas extraction. Groningen’s Slochteren gas field, discovered in 1959 and one of the largest in the world, has brought economic growth, jobs and prosperity both to the region and to the country as a whole.

But times have changed. Today the Northern Netherlands is taking up the next big challenge in gas: delivering Europe’s first fully integrated green hydrogen economy. The earthquakes, climate change and the realisation that the next energy revolution could be taking place right here have sprung the region into action.

Hydrogen is the new gas. Green hydrogen, made from the electrolysis of water powered by renewables, will help enable Europe reach net zero emissions by 2050.

When the planets align

“The Northern Netherlands has everything to make a success of this energy transition,” says Esther de Lange, the Dutch MEP who led the country’s Christian Democrats in the recent European elections and will now start a new five-year mandate at the European Parliament.

She singles out “engaged inhabitants, innovative businesses, diverse knowledge institutes and an iron will to leave [natural] gas behind” as reasons to believe the region will deliver on its bold ambitions.

The Northern Netherlands is uniquely positioned to become Europe’s first example of a decarbonised economy based on green hydrogen, for several reasons.

First, it is well-equipped to access the massive quantities of green power that will be needed to produce green hydrogen from water (through electrolysis). The electricity is likely to come largely from offshore wind. What better way to store and transport North Sea wind power than by converting it into hydrogen? Onshore wind, solar power and biomass are other options. Some of the green power can also flow in from interconnectors to Norway, Denmark and Germany.

Secondly, Groningen and Drenthe, another province in the Northern Netherlands, have large-scale chemical industries which are already experienced in the production and handling of hydrogen and promising enough demand to bring about economies of scale. The Delfzijl and Emmen chemical sites, known collectively as Chemport Europe, are chemical clusters based on salt and natural gas that want to become climate neutral or even climate positive (a net reduction of emissions) through green hydrogen use.

Thirdly, the Northern Netherlands is very well connected to the rest of the Netherlands and Germany. An EU-funded project in Drenthe called SEREH (Smart Energy Region Emmen Haren) promotes cross-border energy exchange between the two countries. Surplus German renewable power could be stored as hydrogen in the Netherlands and green hydrogen could be exported back to Germany.

Fourthly, the Northern Netherlands has an extensive gas transport and storage infrastructure that could be repurposed for hydrogen use. Mirroring these physical assets is a knowledge and innovation expertise that can similarly be put to new use.

Fifthly, and finally, as De Lange said, there is strong support from politicians, citizens, and businesses for a shift away from natural gas to a new foundation for the regional economy. Climate plans such as those to decarbonise local transport — all public transport should be zero emission by 2030 — offer hydrogen unparalleled end-use opportunities.

The Northern Netherlands is well-known as the Dutch “energy region”, but this is about much more than energy: it is the transformation of an economy, a people, a way of life.

In an analysis five years ago for a first regional green hydrogen economy roadmap, the economics department of ING, a Dutch headquartered bank, estimated that the decline in natural gas production would lead to a potential 10% contraction of the regional economy.

A switch to hydrogen offers a way out. An initial jobs analysis by research institute CE Delft in December 2018 suggests that a large-scale switch to green hydrogen could make a “substantial contribution” to employment. The researchers estimated that tens of thousands of new jobs are possible.

What sets the Northern Netherlands apart from other regions is the breadth and depth of the transformation it must undergo — and hence its ambition. The goal is not simply to test individual hydrogen technologies and applications, but to connect these into a systemic shift to a new energy system and regional economy.

This integrated approach will ensure that individual projects have the support of a network to keep them going, demonstrate to stakeholders the versatility of hydrogen in the energy system and pave the way to its large-scale uptake through economies of scale. 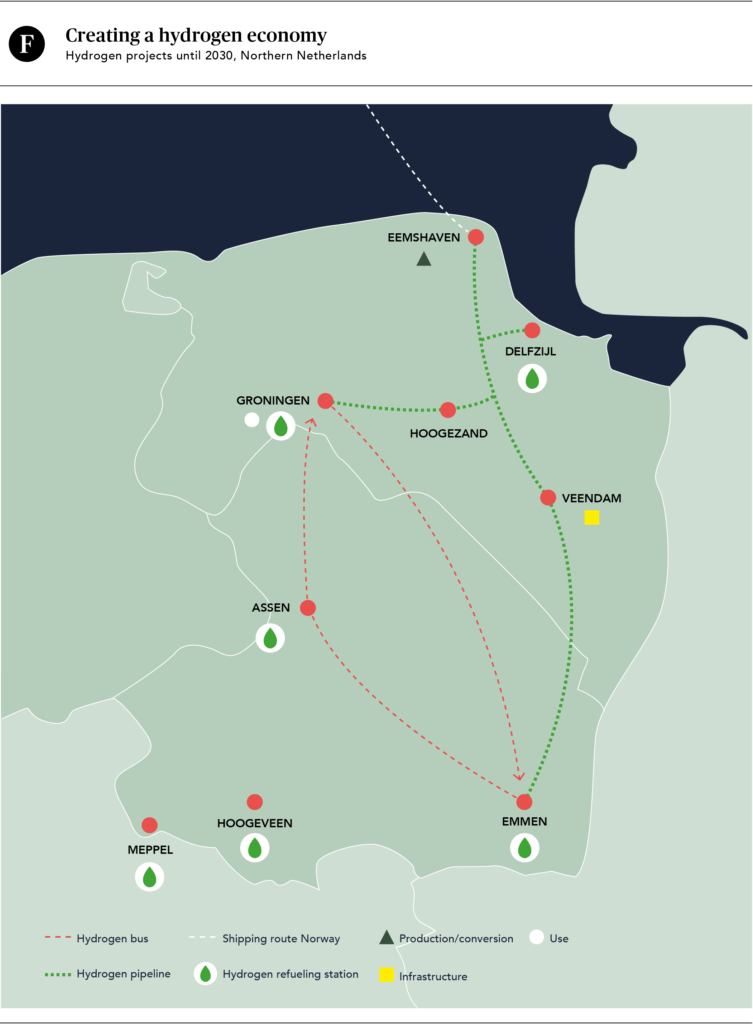 On the same day that Groningen was hit by its latest earthquake, the Northern Netherlands and three other European regions were in Lyon, France, to launch the European Hydrogen Valleys Partnership.

This is a new partnership, backed by the European Commission, that brings together regions keen to explore possibilities around the hydrogen economy. It is the successor to a regions and cities initiative by the Fuel Cells and Hydrogen Joint Undertaking, a public private partnership that was created in 2008 by the Commission, European industry and research organisations.

The new partnership has four founding members, the Northern Netherlands, Aragon in Spain, and Normandy and Auvergne-Rhône-Alpes in France, with at least another 30 regions already queueing up to join. It is part of the Commission’s “smart specialisation” strategy, a place-based approach to regional development that seeks to identify and build on existing competences and assets.

Christian Weinberger, a senior advisor on advanced industrial technologies and coordinator for hydrogen at the Commission’s directorate for industry, explained in Lyon that partnerships like European Hydrogen Valleys are critical: “Because you cannot do industrial policy from Brussels. It is the regions that host the companies, that drive the innovation, that drive the investment with their money, but also with their efforts.” He suggested that European Hydrogen Valleys, the newest of the Commission’s 21 smart specialisation partnerships, could become its biggest and most active.

The goal of the new partnership is to facilitate match-making and co-investment between European regions and act as an active stakeholder for future hydrogen-related EU policy. It will hold its first meeting in Brussels on 25 June 2019. The Northern Netherlands is eager to co-lead this platform and develop large-scale green hydrogen applications together with its partner regions.

The world is watching. The Northern Netherlands has travelled within Europe and beyond — from Scotland and Spain to New Zealand, Japan and California — to learn about and plan for a green hydrogen economy. It has unveiled a €2.8 billion investment plan to deliver emissions-free hydrogen at commercial scale by 2030. This will shake up our region in a very different way than a 3.4-earthquake and it will secure our long-term well-being.