When EU climate and energy commissioner Miguel Arias Cañete visited The Hague, the administrative capital of The Netherlands, on 4 April 2019, he was presented with a world first, an investment plan to deliver emissions-free hydrogen at commercial scale by 2030.

Companies and governments in the northern Dutch provinces of Groningen and Drenthe have drawn up a €2.8 billion plan that is intended to turn their region into a “hydrogen valley” and be a springboard for the hydrogen economy globally. The initiative is supported by over 50 partners around the world.

Green hydrogen is made from the electrolysis of water powered by renewable energies. While already present in some industrial settings, it remains expensive and small-scale. The stepping stone to it is blue hydrogen, made from natural gas with carbon capture and storage (CCS). Blue hydrogen will play an important transitional role in making emissions-free hydrogen available in sufficient volumes to boost and integrate different sectoral uses, and to ensure competitive pricing.

Most people accept that gas will still be part of the European energy system in 2050. It will have a role to play in industry, transport, heating and cooling, and balancing variable renewables such as wind and solar in the power system. 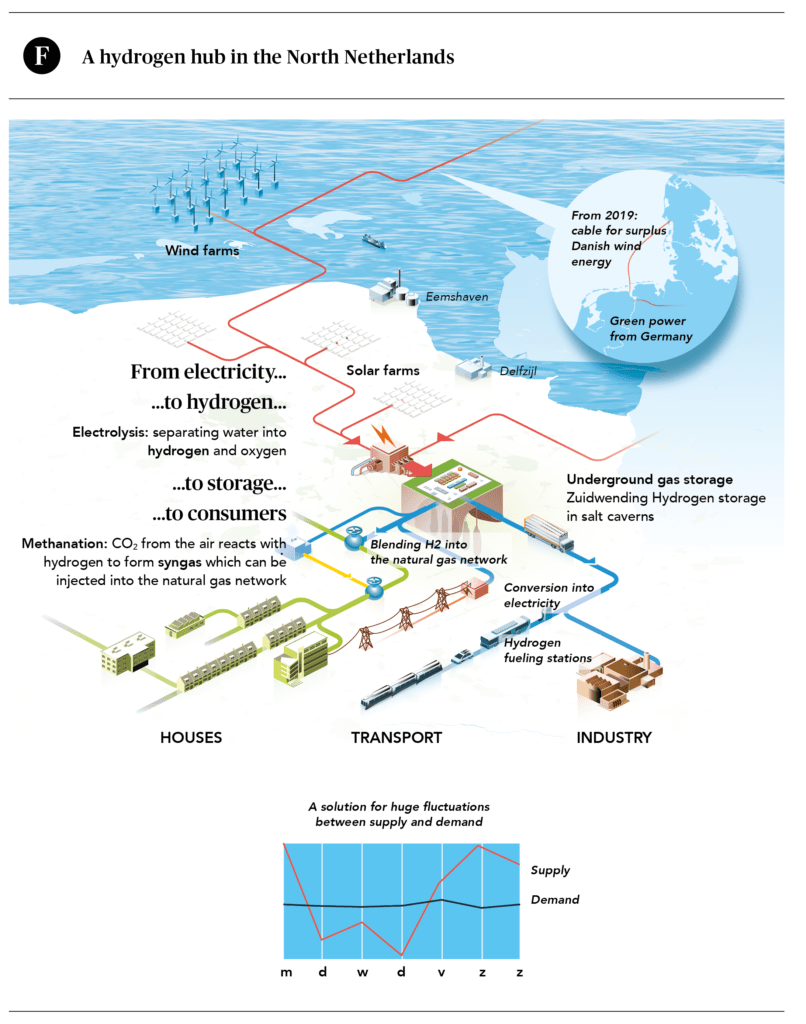 The goal of the Dutch initiative is scale — only this will bring down costs. The means to this are an energy expertise and pipeline infrastructure that the Northern Netherlands has built up over many decades thanks to its abundant natural gas resources.

Today, the region is firmly focused on emissions-free hydrogen as the next generation of gas. It has a unique combination of experience, space, infrastructure and diversity of demand — from the chemical industry, power generation, logistics and heating — that put it in a strong position to lead a new hydrogen economy. The change is also expected to provide a major boost for employment.

The projects are varied. They include plans to build small and large-scale electrolysers of 1 megawatt (MW) to ultimately 1 gigawatt (GW), and “hydrogen wind turbines” where an electrolyser is incorporated in the turbine to produce hydrogen rather than power. There are projects to transform natural gas pipes and create storage sites for both hydrogen and carbon dioxide (the by-product of blue hydrogen production), including “hydrogen caverns”. This is the large-scale storage of hydrogen in salt caverns which can then act as gigantic batteries for the power system. To promote hydrogen use there are projects to roll out hydrogen fuelling stations, equip a new residential area with hydrogen space heating and (partially) convert the 1.32 GW Magnum power plant at Eemshaven, Groningen, from natural gas to hydrogen.

Hydrogen Valley fits with the climate and energy goals of the Netherlands and Europe. Cañete was in The Hague to discuss the European Commission’s 2050 climate strategy. This recognises that hydrogen “is likely to become more prominent in a fully decarbonised energy system”.

The Netherlands supports the Commission in its quest for carbon neutrality for the EU by mid-century. It was one of 11 countries not to sign a recent declaration on a Sustainable and Smart Gas Infrastructure for Europe – an initiative from EU Presidency holder Romania – because it did not explicitly reference this goal. The Netherlands also wants Europe to increase its 2030 emissions reduction target from 40% to 55% below 1990 levels.

On his visit to The Hague, Cañete told Dutch climate minister Eric Wiebes: “I am very happy that some countries have more ambitious [climate] goals,” reported Dutch newspaper the NRC. But the Commissioner also emphasised the enormity of the challenge ahead and expressed concern about the share of renewable energy in the Netherlands to date.

Hydrogen Valley is part of the Dutch climate and energy plan for the next decade. It could make a real contribution to the 2030 agenda if it succeeds in its aim of a major scale-up of emissions-free hydrogen within the next five to seven years.

The Dutch government has already lent its support to the project, recognising that it fits with federal plans for climate action and regional development. It commends the initiative’s cross-sectoral approach and support from public and private stakeholders, education institutions and civil society.

The Commission is expected to start building a regulatory framework for hydrogen as part of a gas policy package tentatively planned for 2020. In its 2050 climate strategy, the Commission notes that emissions-free hydrogen can help balance out variable renewables, and act as an alternative energy carrier and feedstock in heating, transport and industry.

The goal of Hydrogen Valley is to make emissions-free hydrogen cost competitive over the next decade. For this, the first priority is to fill a financing gap of €100 million a year from now to 2024. Companies in the Northern Netherlands are ready to cover part of it, but are seeking public support from the federal government and the EU for the rest.

After 2024, a peak in investment of €1.37 billion is foreseen for 2025 to coincide with the start of the scale-up. The goal is to produce billions of cubic metres (bcm) of blue and green hydrogen a year, with each bcm saving some 600,000 tones of carbon dioxide. To get an idea of scale, 1.5 bcm equates to roughly the amount of hydrogen envisaged for the conversion of the Magnum power plant (producing roughly 1.5 GW of electricity a year).

The Netherlands is busy putting in place the building blocks to enable a national energy transition that includes Hydrogen Valley. The government has ambitious plans for 11.5 GW of offshore wind capacity by 2030, which will provide part of the renewable energy needed for large-scale green hydrogen production. Some of the green electricity can also come from neighbouring countries such as Norway, Denmark or Germany via interconnectors.

In parallel, there are several CCS pilot projects underway in the Netherlands, notably at the Port of Rotterdam, to continue the development of this technology, which is part of the blue hydrogen production chain.

In a new study for the European Gas for Climate consortium in March 2019, consultants Navigant suggest the costs of blue and green hydrogen could be just over €50/MWh by 2050. The headline conclusion of the study is that emissions-free hydrogen is essential to bring the European energy system to net zero emissions in an affordable manner by 2050.

The goal of the Northern Netherlands is to lead a global shift from natural gas to green hydrogen, and deliver an energy transition for an entire region.