When we look at increases in renewable energy production in the EU, it is striking that much of it is provided in the form of electricity. Advances in wind and solar power support our belief that we can provide enough sustainable energy at affordable cost. It is difficult, however, to get green power to every consumer at the right time and place. Sectoral integration is the idea of linking up disparate sectors to make green power available to all energy consumers. We, in the North of the Netherlands, believe hydrogen is one of the essential means to make sectoral integration happen and in this way enable an energy transition for all.

The Northern Netherlands will come to Brussels on 19 June 2019 to host an event and explain how we are building up a “hydrogen economy” to take the European energy transition to the next level. This means extending it beyond the power sector to industry, heating and transport, and making it more cost-effective. Experts from government and industry will debate the opportunities and challenges for emission-free hydrogen at industrial scale.

The event is an official side event of EU Sustainable Energy Week and one of several dedicated to what is rapidly becoming the next big thing on the Brussels energy agenda.

Hydrogen “is likely to become more prominent in a fully decarbonised energy system”, the European Commission says in its vision for net zero emissions in 2050. It must be emission-free, of course. In other words, it must come from processes such as the electrolysis of water using carbon-free electricity (green hydrogen) or natural gas with carbon capture and storage (CCS) (blue hydrogen).

Once it is zero-carbon, hydrogen unlocks all kinds of opportunities. The Commission explains: “First, as storage in the power sector to accommodate for variable energy sources [such as wind and solar]; second, as an energy carrier option used in heating, transport and industry and, finally, as a feedstock for industry such as steel, chemicals and e-fuels in those sectors that are most difficult to decarbonise.”

We took this idea of sectoral integration to heart and are putting it into practice. In February 2019, we presented a world first, an investment plan to deliver emission-free hydrogen at commercial scale by 2030. Our € 2.8 billion plan is supported by over 50 local and international partners. The ultimate goal is green hydrogen, while blue hydrogen will play an important transitional role.

Our vision is to integrate over 30 individual projects across the Northern Netherlands into a new regional energy system based on green hydrogen. The projects span every step of the hydrogen value chain. They draw on our existing energy expertise and infrastructure, and a rich spread of end-use applications. We want to demonstrate that we can indeed bring clean energy to all sectors of the economy.

The Northern Netherlands has the means to produce green hydrogen (via access to large quantities of renewable power, notably from offshore wind but also via interconnectors); transport and store it (by re-purposing gas pipelines and salt caverns); and use it (including large-scale chemical industries to create economies of scale, heavy mobility needs and good connections to the rest of the Netherlands and Germany).

The power sector is the most obvious beneficiary. The large volumes of renewables that the Netherlands plans to build over the coming years — 11.5 gigawatts (GW) of offshore wind alone are due to come online by 2030 — would lead to grid congestion and curtailment without the option of converting some of it to hydrogen for seasonal storage.

Hydrogen production via electrolysis can speed up the energy transition by enabling the system to absorb more wind and solar power. The Northern Netherlands also foresees the conversion of a 1.3 GW power plant to be able to recycle hydrogen back into power, at the time the market actually needs the energy.

Central to getting green hydrogen volumes up and costs down, however, is the region’s energy-intensive chemical sector. Energy-intensive industries are notoriously difficult to decarbonise, yet sectors like refining, steel and chemicals are the biggest consumers of hydrogen.

Green hydrogen will flow to households as well as industry. For example, the project “Waterstofwijk Hoogeveen” (Hydrogen Neighbourhood Hoogeveen) foresees a new residential area of 80 houses that will be entirely heated by green hydrogen. In a second step, we plan to convert 1130 existing homes in an adjacent neighbourhood by upgrading local pipes and installing new boilers.

Finally, hydrogen will help decarbonise transport. All public transport in the Northern Netherlands will be carbon-free by 2030. Regional governments are targeting green hydrogen first at city buses and utility vehicles (street sweepers and garbage trucks); second will be light utility vans and coaches; and third, heavy duty transport and parts of shipping and rail.

There are plans for the conversion of vehicles and deployment of refuelling stations. Part of the latter fall under a European priority infrastructure project backed by EU funds. 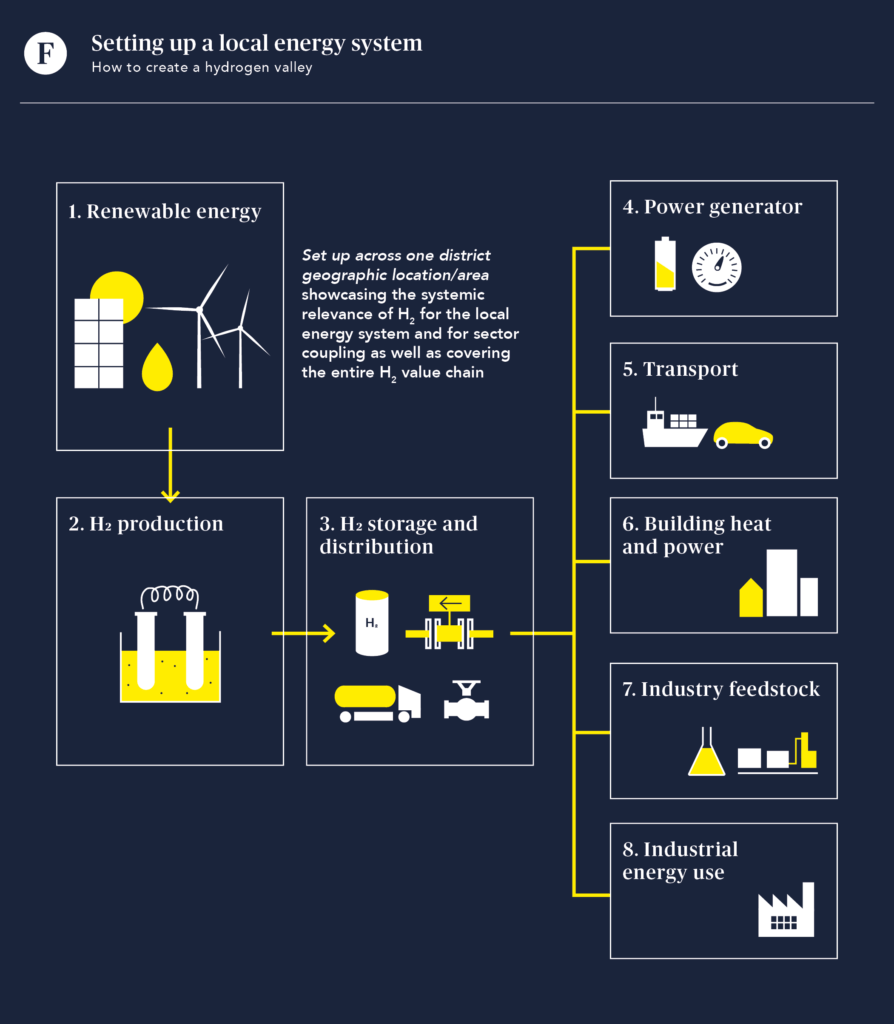 The total demand for hydrogen will be highly dependent on price. Not all hydrogen will be green at first since the construction of both green electricity production and electrolysers will start small. The planned volumes of green hydrogen will reach 7 petajoules (PJ) in 2024. Of course this hydrogen will be more expensive than grey hydrogen from natural gas. But we have every reason to believe that costs will come down and it will become competitive, once water electrolysers become mass products.

The goal is to make emission-free hydrogen cost-competitive over the next decade. Most of the €2.8 billion in our investment plan is to build up hydrogen production capacity. A small part of it will be used to upgrade existing gas infrastructure and create storage sites. The goal is to produce billions of cubic metres (bcm) of emission-free hydrogen a year, with each bcm saving some 600,000 tonnes of carbon dioxide.

We are supporting these investments with the Hydrohub, a new test centre in the Northern Netherlands where knowledge institutions and companies can trial innovations in electrolysis plants of half a megawatt. This research should lead to a standard design for large-scale electrolysis and help the region build a technological lead in the field of hydrogen.

Costs need to come down and they will. Today “grey” hydrogen made from natural gas (without CCS) costs about €1.50 a kilo. With CCS, the costs go up to around €3 a kilo for blue hydrogen. What we actually want — green hydrogen from green electricity — costs at least €3.50 a kilo. But the price gap between green and grey hydrogen is much less than the original gap between green and fossil power.

Some companies have already figured out sustainable business cases. Danish power company Ørsted recently announced that its bid in an offshore wind auction in the Netherlands includes the production of green hydrogen for industry.

We cannot allow the current momentum for to hydrogen fade away. We need to make it happen now. Energy and climate policy can facilitate this process in several ways. CO2 pricing makes grey hydrogen less competitive. CCS can expect future support from the Dutch government. Zero emission standards for vehicles can help build demand for hydrogen in transport. There is a discussion in Brussels for an obligation to blend clean gas into existing gas grids. We are working on guarantees of origin, quality and safety standards, and the role of market participants in a new hydrogen economy.

But we also need to support the necessary scaling-up financially as industry cannot be expected to bear the total cost alone. Our €2.8 billion investment plan foresees a €100-million-a-year financing gap from 2019-24.

Technically, it is doable. Let’s make it happen! On 19 June, you can join a group of policymakers and investors in hydrogen to discuss how to take this forward. When we organised an information evening on heating by hydrogen on 14 May for the people of Hoogeveen, 180 inhabitants signed up and 400 showed up. I look forward to seeing you at our session in Brussels.