Climate and energy transition reads for the summer holidays

Getting lost in a good book is one way many of us forget about work during our summer holidays. Novels and non-fiction also offer new insights into subjects we discuss in our professional lives every day. FORESIGHT’s editorial team recommends three books with close links to climate change and the energy transition to read on the beach, up a mountain, on a sunny terrace or simply in your back garden 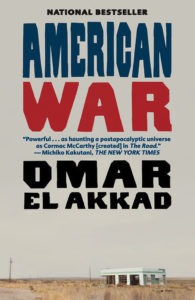 The year is 2075. In response to adverse climate change effects, the US government has banned fossil fuels, leading to the Second American Civil War. States that adopted clean energies are fighting against certain southern states which seceded in revolt against the ban on oil, gas and coal.

Aged six, Sarat and her family are forced to flee after her father dies and in fear of the war (and water) that is moving closer to their Louisiana coastal home. After finding shelter in a refugee camp, we see, over the years, how Sarat’s determination to survive as an outcast leads to her slow radicalisation as the ultimate weapon in the bloody war.

Classed as speculative fiction, American War depicts what our future could be if we do not urgently speed up efforts to phase out fossil fuels and slash greenhouse gas emissions — loss of coastal communities, loss of livelihoods, loss of youthful innocence, a new world order where those who transitioned to cleaner energy are the geopolitical powerhouse and where every day is a fight for survival.

Scary and enthralling at the same time, it is one to read slowly and savour every word and twist. 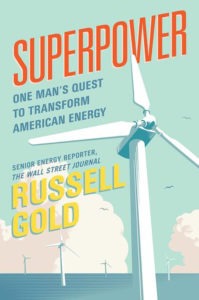 In 2016, renewable energy visionary Michael Skelly was given an award by the American Wind Energy Association for his contribution to improving the country’s transmission grid. He told the audience that a better grid means more wind power can be built, before he added with more than a little irony: “And we all know that transmission is the sexiest part of the electricity industry!”

Indeed it is not a subject the average consumer knows much about, though a good and efficient grid is one of the foundations of transitioning to clean electricity. That is especially so in the US where wind and solar power may be generated hundreds of kilometres from cities.

Superpower: One Man’s Quest to Transform American Energy by Wall Street Journal senior energy reporter Russell Gold traces Skelly’s attempts as head of a private development company — rather than a utility — to build new long distance transmission lines for wind power. And while the book may not make transmission sexy, it is a well-written and compelling tale and as good a history of renewable energy in America as you will find anywhere.

Gold introduces us to the charismatic Skelly as he visits the remote and wind-swept Oklahoma Panhandle in 2009. It is worth noting that when Skelly ran unsuccessfully as a Democrat for the US House of Representatives in 2008 he raised more money than anyone else nationally.

His story is the narrative that leads us through the growth of wind power in the US, including interviews with pioneers. It leaves us confronting what is perhaps the sector’s single greatest challenge — the lack of a grid sufficient to meet the challenges of the twenty-first century.

The author provides fascinating background on subjects ranging from ERCOT, the Texas energy reliability council with responsibility for the state’s power system, to the world’s first electricity network by Thomas Edison and even a brief foray into 1980s rock and roll in New York City.

Skelly’s company, Clean Line Energy, recently folded after a decade of trying to develop five multi-state high-voltage direct-current lines to transmit 16.5 gigawatts of wind energy in the mid and southwestern US. The lines faced opposition from regulators, reluctant buyers of the power and NIMBYs — those who said a transmission line should not be built in my back yard — as well as a pro-nuclear senator and the conservative presidency of Donald Trump, which cancelled an Obama era plan to clean up the country’s power plants. 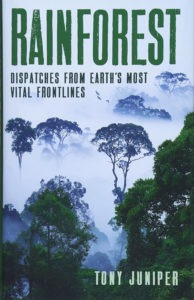 Planting billions of trees is the most effective way to combat climate change, claimed media headlines based on a recent study in the journal Science. While the reality is a little more complicated, scientists agree that trees have a vital role to play in climate change mitigation by absorbing carbon, and in climate change adaptation by cooling cities and people. And while planting new forests is important, a clear priority should clearly be stopping deforestation, in particular in Brazil, where the Amazon continues to be cleared at an alarming rate.

UK environmental campaigner Tony Juniper explains why this destruction needs to stop and why rainforests are key to the health of our world, including for storing and absorbing carbon. He explains how these amazing ecosystems work and the incredible animals that are part of them. The insects, mammals and plants not only have intrinsic value, but are also a source of inspiration for the future of our society. Juniper gives various examples of biomimetic research — innovations created by natural selection that can assist in technological change. The structure of the glassing butterfly’s transparent wing panels, for instance, have inspired designs for more efficient solar panels.

First published in the UK in 2018, Juniper wrote his book before rightwing politician Jair Bolsonaro became president of Brazil and he ends his book on a relatively optimistic note. “Today the case for rainforests has been successfully made and action is being taken, albeit not yet on a sufficiently large scale, or with the consistency of political leadership that is needed,” says Juniper. Deforestation in Brazil’s portion of the Amazon rainforest rose more than 88% in June 2019 compared with the same month a year previously, the second consecutive month of rising forest destruction under Bolsonaro, shows data from Brazil’s space agency.

The book is a timely reminder that nature, climate, human society and technology are inextricably linked. Ignoring climate change and the energy transition, as advocated by Bolsonaro and certain other world leaders, cannot change this fact and will ultimately imperil the economies they purport to defend.

Protecting the rainforests for their own sake and that of people would lead to a: “Multi-trillion-dollar dividend of improved climatic stability, in water security, energy and food security, in helping to reduce the social and political chaos and misery arriving from mass migration by advancing poverty reduction and development goals,” writes Juniper.

“And beyond all this lies the task of securing the very future of so much of life on Earth — the evolutionary heritage that will help maintain our food supplies, inspire medial innovation and assist with breakthroughs in design and engineering.” Including the breakthroughs needed to end our addiction to fossil fuels and power the world with clean energy.