Other countries have hydrogen economies — just think of Japan — but Europe has the potential to lead the world on green hydrogen. Hydrogen features in all of the European Commission’s net zero emissions scenarios for 2050. It is essential to decarbonise hard-to-electrify sectors of the economy. But to make a difference to climate change, it needs to be emissions-free.

Almost all the hydrogen in use today, most of it in heavy industry, is so-called “grey” hydrogen made from natural gas. If the world is serious about the Paris climate agreement, it needs to make “green” hydrogen from the wind- and solar-powered electrolysis of water. “Blue” hydrogen from natural gas with carbon capture and storage (CCS) can play an important transitional role.

In September 2019, the Northern Netherlands won €20 million in EU funds to help it become the first “European Hydrogen Valley”. The grant, which will be matched by another €70 million of public and private money, is based on an investment agenda published in February 2019, which covers over 30 projects. These range from building electrolysers to repurposing natural gas pipelines and salt caverns for hydrogen transport and storage, to promoting green hydrogen in industry, transport, heating and power generation.

The grant was awarded by the Fuel Cells and Hydrogen Joint Undertaking (FCH JU), a European R&D partnership under Horizon 2020, in its first-ever call for a European Hydrogen Valley. The Northern Netherlands won from a pool of six projects. “It was not the biggest but the best,” explained FCH JU executive director Bart Biebuyck at a Wind Meets Gas conference in Groningen in October 2019. “It really showed all sectors working together.”

“This region is trying to show what the hydrogen economy is in reality,” said Professor Katsuhiko Hirose, an ex-Toyota hydrogen expert who helped set up the Hydrogen Council, an international CEO-led initiative to promote hydrogen, at the same conference.

We in the Northern Netherlands — Groningen, Drenthe and Friesland — have been pushed to innovate by local earthquakes caused by natural gas production as well as the climate crisis. The hydrogen economy is our new story. Groningen aims to be carbon neutral by 2035. We will transition our extensive gas infrastructure, expertise and demand to green hydrogen. More than 260 companies in the Netherlands are already working on hydrogen.

“All the conditions you need to roll out a hydrogen economy are here,” said Dutch minister of economic affairs and climate policy, Eric Wiebes, in Groningen. “If we fail, everybody will fail.”

The business case for green hydrogen starts with offshore wind. There is tremendous potential for this in the North Sea, but the big challenge is how to transport and store all this energy. Hydrogen and the existing gas infrastructure are the perfect solution. “Wind needs gas; gas needs wind,” as Wiebes put it.

The Dutch government will make about half a billion euros available to develop the clean hydrogen value chain over the next ten years. This money is intended to support an industrial roll-out as well as further R&D. The next few years are crucial for green hydrogen to break out into the mainstream, said RWE’s CEO for generation, Roger Miesen, in Groningen. This means final investment decisions for electrolysers of at least 100 megawatts (MW), up from 10 MW today, he clarified.

I would say that by 2025, the year the European Hydrogen Valley grant ends, we need to have a 1 gigawatt (GW) electrolyser up and running, and a clear idea of how many more are needed. Michèle Azalbert, head of hydrogen for Engie, told the Wind Meets Gas conference that this could deliver 3% of the Dutch greenhouse gas emission reduction target for 2030.

How governments implement the EU’s new renewable energy directive will be crucial to create market demand for green hydrogen, Miesen stressed. The challenge for clean hydrogen so far has been that the potential volumes are in industry, but the margins — and incentives — are in transport, explained Biebuyck. Hydrogen use in transport is important to create visibility for the fuel.

In Brussels, the FCH JU is asking the EU to double its funds to €1.3 billion for the next spending period, from 2021-27, to enable it to pursue two goals: pilots in heavy transport (these will cost around €20 million rather than €20,000 for cars), and hydrogen projects in Central and Eastern Europe, which have seen few to date. An EU consultation on the future European Partnership for Clean Hydrogen is open until November 6, 2019.

On October, 9, senior EU officials and CEOs announced in Brussels that they would work together on a European industrial strategy for green hydrogen. This is a priority for the incoming European Commission. Dutch politician Frans Timmermans, tasked with delivering a European Green Deal as one of the Commission’s vice presidents, told MEPs during his hearing on October,7 that: “Europeans can really lead on this.”

Europe is three years ahead of the rest of the world on electrolyser technology, said Biebuyck. It lost out on solar panels and missed the boat on batteries, but here is an opportunity to stay ahead on a key technology of the future.

This kind of thinking underpinned the launch on October, 9 of a so-called Important Project of Common European Interest (IPCEI) for hydrogen. It is the EU’s fourth such project, after a first in microelectronics finalised in 2018 and two under development for batteries for electric vehicles. The hydrogen IPCEI is likely to consist of at least 11 projects, which add up to over €60 billion of investment over the next five to ten years.

The Northern Netherlands is superbly situated to be the start of a 2000 kilometre “hydrogen backbone” in northwestern Europe, stretching from northern France to central Germany and fed by electrolysers in the Eemshaven seaport in Groningen. A project like Green Octopus could become a flagship project for hydrogen infrastructure.

“IPCEIs are there to serve industrial policy,” explained Christian Weinberger, coordinator for hydrogen at the Commission’s industry directorate (DG Grow) in October. “Their goal is to help with scale up.” At Wind Meets Gas he added: “They are not about 2050. They are for the next five to ten years.”

IPCEI projects are exempt from EU state aid rules to let national governments give them as much support as they need, including for a first industrial roll-out. They must be cross-border with “positive spillovers” for Europe as a whole, says the Commission. 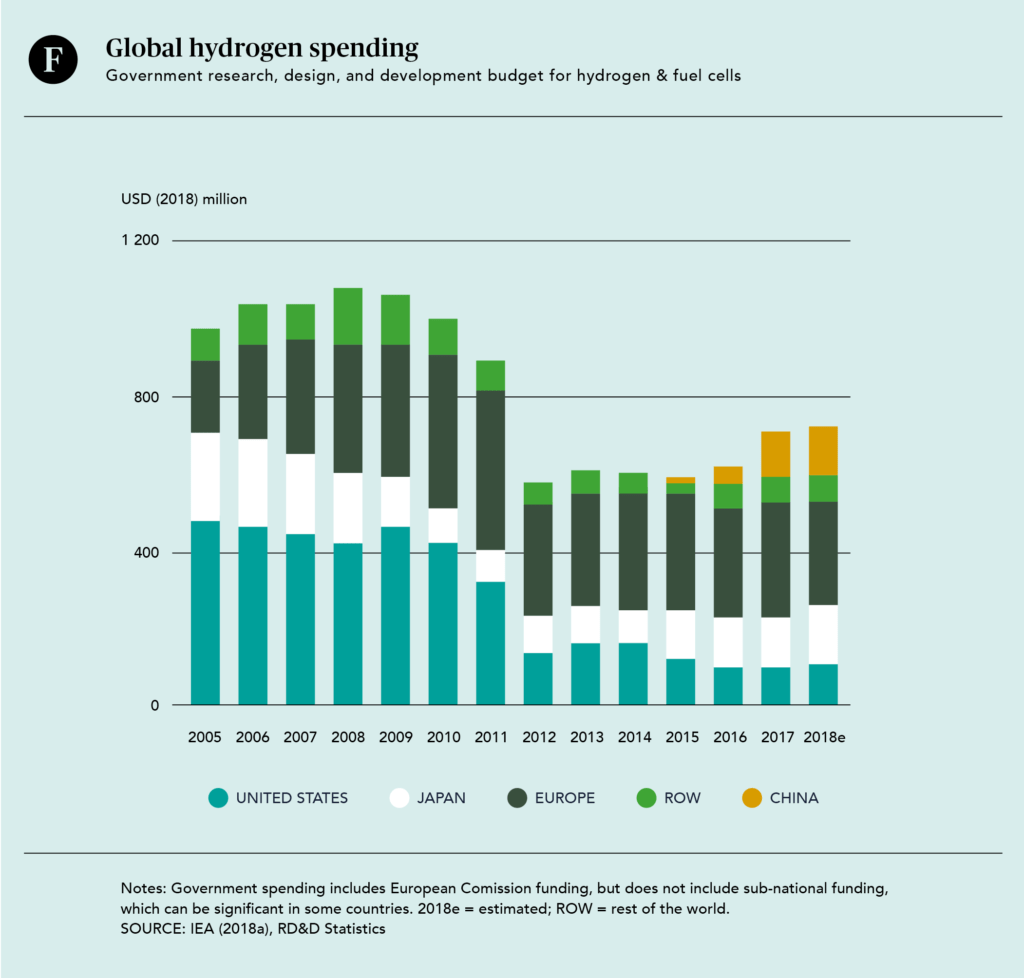 The Netherlands is looking for a “shared approach” on regulation, certification and standards to develop an international hydrogen market, said Wiebes. He signed a cooperation agreement for offshore wind and hydrogen with his German counterpart, Peter Altmaier, at the start of October.

There are bilateral talks underway too between the Netherlands and Flanders, notably around using ports as “nerve centres” for scaling up the use of clean hydrogen. This is what the International Energy Agency (IEA) recommended in its flagship report on hydrogen in July 2019.

Hydrogen is also on the agenda of the Pentalateral Energy Forum, a Central Western Europe initiative to better integrate power markets, and of the EU. The latter’s work on a gas or decarbonisation package, now only expected in 2021, will be crucial to develop a definition of green hydrogen, and how and where it can be produced and used.

Finally, the Northern Netherlands is one of four founding members of a new European Hydrogen Valleys Partnership, launched in May 2019, that counts 31 members from 13 countries.

Governments around the world are eyeing the potential of hydrogen. In some, the emphasis is on green hydrogen, in others also on blue hydrogen, says Dutch Hydrogen Envoy Noé van Hulst. For some, like Japan, it will be an essential import; for others, such as Australia, a lucrative export. Europe will also need to import emission-free hydrogen because demand for it will be greater than what we can produce, the IEA says.

Politicians like Timmermans point out that this is about much more than energy. Green hydrogen offers a new avenue for cooperation with regions such as the Middle East and Africa and could spur local economic development there.

When Europe becomes the first region to come to the market with zero-carbon steel or refining enabled by green hydrogen, it will open up an export industry “from here to Tokyo”, says Van Hulst.